Quotations of or allusions to the Bible in newspapers from the nineteenth and early twentieth-century United States were widely varied. This gallery contains examples of the more interesting kinds, intended to give concrete examples of the millions of quotations this project has identified. While the bulk of this site is intended to help understand the patterns and trends by which the Bible was quoted, each of these quotations is a text worthy of interpretation itself. You can use this gallery as an introductory guide to the ways that newspapers made use of the Bible.

When using this gallery you can do the following: 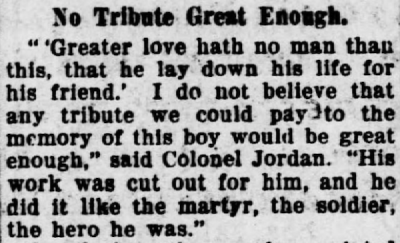 Obituaries for soldiers and sailors ∞

A memorial to a Rock Island, Illinois, soldier who died in World War I after saving other soldiers in a mustard gas attack. The text “greater love has no man than this, that he lay down his life for his friend” was commonly used in obituaries for soldiers and sailors during the Great War. 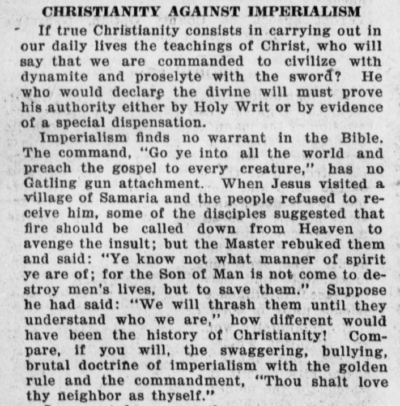 In a speech on imperialism, this author criticized the forceful interpretation of Mark 16:15, “Go ye into the world and preach the gospel to every creature.” Rather, the author emphasized prosyletizing through everyday examples of living “true Christianity” as the more appropriate method of converting the world. Imperialism is “swaggering, bullying, brutal,” and the article urges missionaries to not create a negative association between imperialism and Christianity. 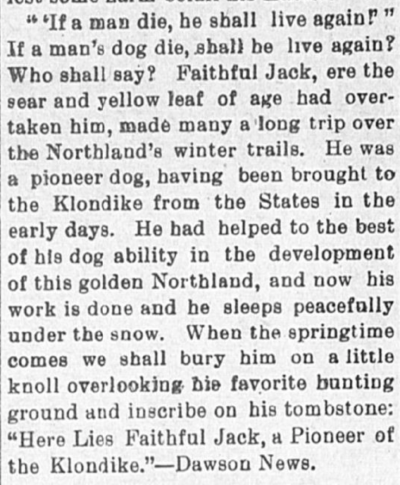 Extending Job 14:14, “If a man die, shall he live again?” to animals, this Alaskan newspaper honors the passing of a Yukon miner’s sled dog. Revered as “a Pioneer of the Klondike,” Faithful Jack is credited with having been essential to the United States’ presence in the Yukon and “the development of this golden Northland.” 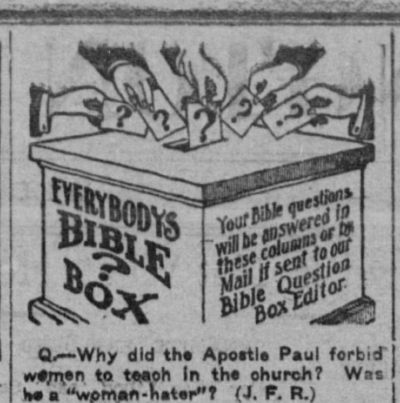 Newspapers sometimes ran columns where readers could write in with questions about the Bible or Christianity. In this “Everybody’s Bible Box” column, a reader asked whether the Apostle Paul was a “woman hater” because of the verse “I suffer not a woman to teach, nor to usurp authority over the man” (1 Timothy 2:12). The columnist replied by discussing “the proper relationship between the man and the woman” presented in Ephesians 5. 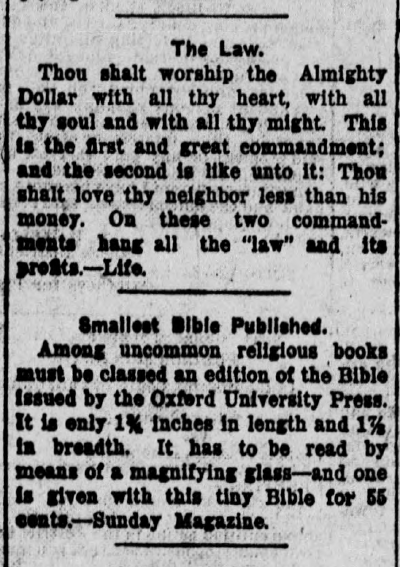 Interlinear commentary on the Law ∞

This brief snippet offers a tongue-in-cheek admonition to “worship the Almighty Dollar,” and ends with the rather clever play on the words “law and profits.” This quotation is an example of a joke, but it is also an example of a kind of interlinear commentary, in which the language of Scripture is interleaved with language from some other source, thus changing the meaning of the text. 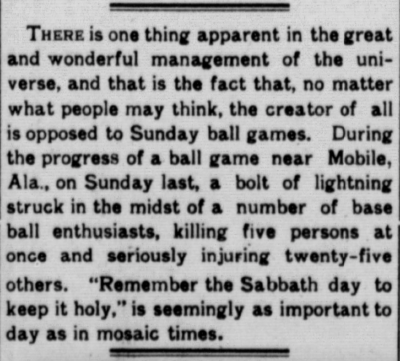 This author questions the influence of sports culture on the nation’s ability to keep the Christian Sabbath. They urge readers to “Remember the Sabbath day and keep it holy” and not attend baseball games on Sundays. The author interpreted the death of multiple people from a lightning strike as direct reaction from God and felt called to print a warning. 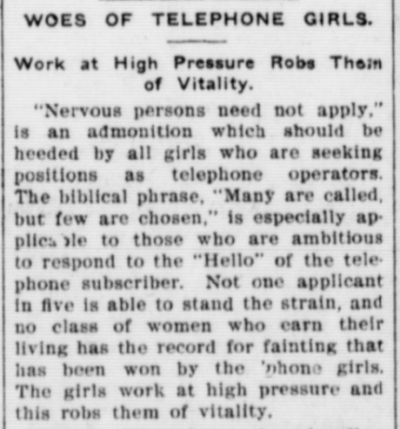 As women began to replace men as the primary switchboard operators, questions arose over whether women would be able to keep up with the job. Noting that “many are called, but few are chosen,” this article cautioned female applicants on the high-pressure and energy-draining nature of telephone operating.

He whipped his wife, then quoted scripture ∞

In this article, Edward Spencer quotes Ephesians 5:22 in a courtroom as an excuse for domestic violence. In a fit of anger, Spencer argued with his wife and accused her of not upholding her vows in the marriage. He quotes this verse to support his argument that “the wife should be subject to the husband in all things.”

Jug not lest ye be jugged ∞

A temperance joke hinges on an allusion to the biblical phrase, “Judge not, lest ye be judged.” 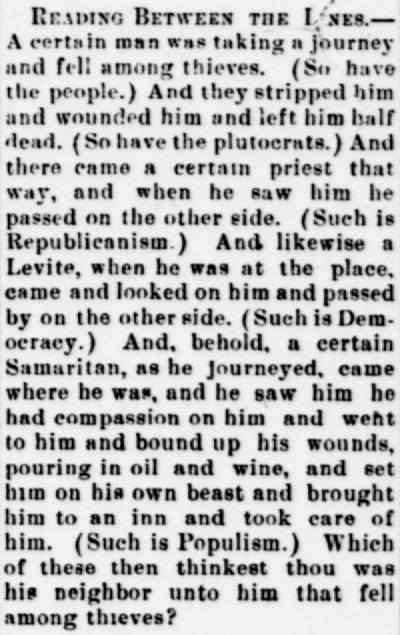 Reading between the lines ∞

This article retells the parable of the Good Samaritan, offering an interlinear commentary that uses the parable’s moral authority in support of the Populist movement. The injured man is identified as “the people,” those who attacked him as “the plutocrats.” The Republican and Democratic political parties are identified as those people who ignored the wounded man, but the Good Samaritan is compared to the Populists.

This advertisement for the YMCA promotes the health and career benefits of weight training and classes. It boasts the ability to transform young men from “a perfect little physical coward” into successful businessmen, reflected by their physical appearance. The YMCA could thus be known by its “fruits.” 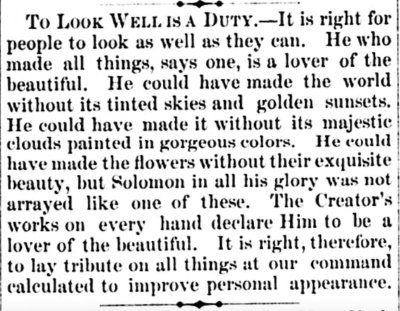 Proclaiming that “To Look Well Is A Duty,” this author asserts that God must be “a lover of the beautiful” because of the beauty of nature. They reference part of Luke 12:17, “but Solomon in all his glory was not arrayed like one of these,” asserting that the option of a non-beautiful creation proves that God prefers beauty. Therefore, the maintenance of an individual’s personal appearance is an act of tribute to Him and should be continuously pursued, contrary to warnings against vanity. 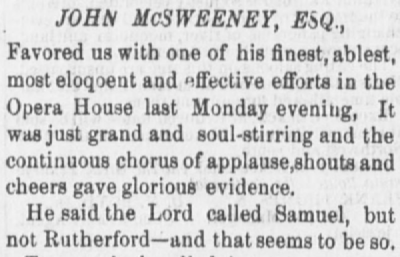 This advertisement, published multiple times in the Forest Republican during 1872, encouraged consumers to buy dry goods exclusively from Hilbronner & Co. Imitating the Ten Commandments found in Exodus 20, this advertisement commanded buyers to shop only at Hilbronner, attempting to paint the brand for consumers as superior to other vendors. Should the consumer break any of these commandments, it is implied that they will not live as prosperously.

This tongue-in-cheek advertisement is one of many examples where newspaper advertisements or articles imitated or even parodied well-known passages from the Bible. 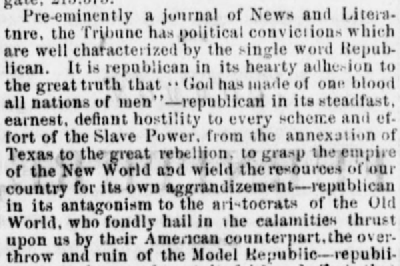 The New York Tribune identified itself as Republican and anti-slavery by quoting Acts 17:26, “God has made of one blood all nations of men.” Other newspapers reprinted this advertisement. 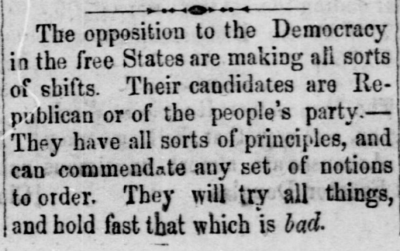 Fill in the blanks ∞

Some biblical verses were used as stock phrases or proverbial expressions. One such example is 1 Thessalonians 5:29, “Prove all things; hold fast that which is good.” As stock expressions, though, they could also be used as fill-in-the-blanks where key words were changed to make the author’s point. In this example, a Democrat criticizes Republican candidates for office by changing “good” to “bad.” 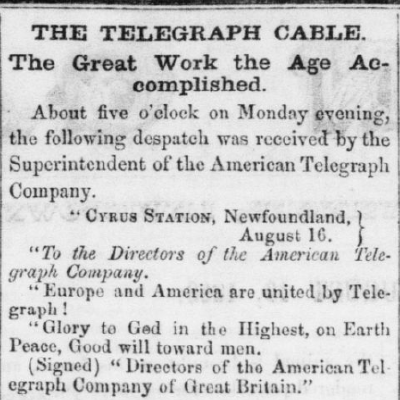 On August 16, 1858, Cyrus Field sent the first official message across the transatlantic cable. It read, “Glory to God in the highest; on earth peace, good will toward men.” In the following days, newspapers across the country recounted the historic exchange that followed between President James Buchanan and Queen Victoria. Communication that once took upwards of 10 days to deliver could now be transmitted in minutes. 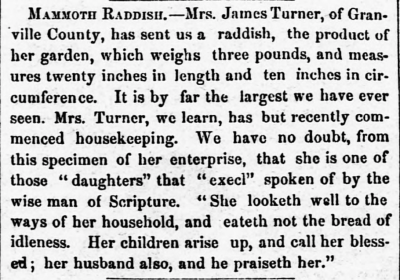 This Raleigh newspaper praised Mrs. James Turner for her the size of her radish, an indicator of her gardening skills. She was praised in the words of the Proverbs: “Her children arise up, and call her blessed; her husband also, and he praiseth her” for her fulfillment of expectations of womanhood and domesticity. 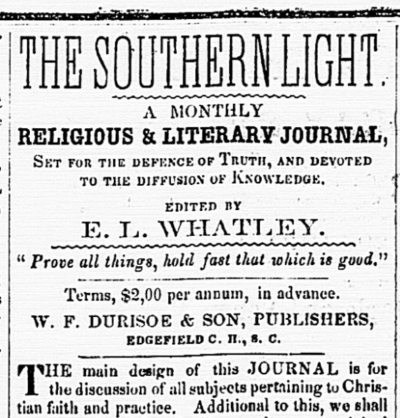 The Southern Light advertised itself using the biblical phrase, “Prove all things, hold fast that which is good.” That expression was so pliable that it could be used in nearly any context. In this instance, the phrase fit with the newspaper’s idealized purpose of being a source of truth. 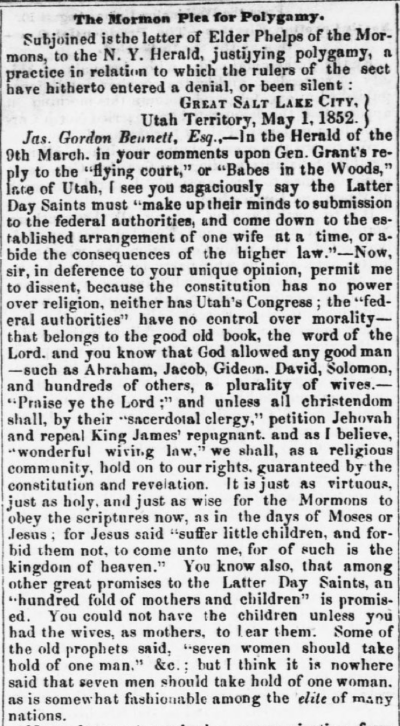 In this letter, Elder Phelps defends the Mormon practice of polygamy against accusations made by James Beunett in the New York Herald. Phelps uses Luke 18:16 to emphasize the justification of polygamy as the virtuous, original intention of scripture and that neither federal or local government has control over Mormon religious practices. He closes by calling into question alleged sexual proclivities of national elites, flipping the accusation of who acts beyond the bounds of morality. This advertisement emphasizes the popularity and reliability of “Dr. Spencer’s Vegetable Pills,” using 1 Thessalonians 5:21. “Hold fast” translates to “buy” and “what is good” refers to the product or service being offered. This advertisement was published many times in multiple papers. 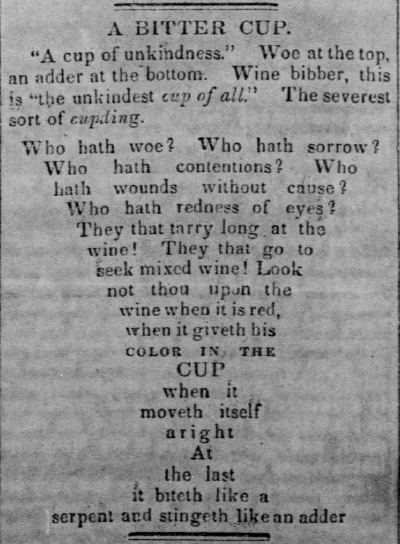 This biblical quotation, embedded in a short article in the shape of an wine glass, warns against drunkenness. The same typography was also used in other newspapers.

A national day of thanksgiving ∞

Six months after the Civil War came to an end, President Andrew Johnson gave a proclamation in which he attributed the end of the war to God’s favor over the United States, citing Proverbs 14:34. The ability to “secure the blessings of peace, unity, and harmony, with a great enlargement of civil liberty” was, in Johnson’s eyes, a gift from “our Heavenly Father.” The proximate cause of Johnson’s proclamation was the end of the Civil War, but he was participating in a long tradition of thanksgivings (and fasts) as a tool for political unity (in this case, a unity that was conspicuously absent). The text “righteousness exalteth a nation, while sin is a reproach to any people” was also used for fast days. Whether in service of feast or fast, Proverbs 14:34 was commonly used as a key text of American civil religion. 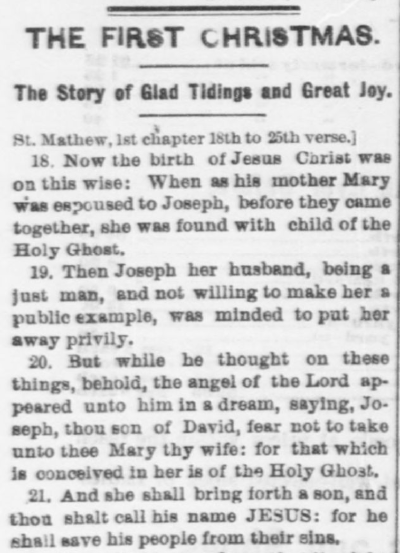 During Christmas and Easter, newspapers would sometimes reprint lengthy passages of Scripture. In this instance, most of several chapters from the four Gospels about Jesus’ birth were reproduced, alongside a Christmas carol by Christina Rosetti. Usually these passages were reproduced without comment, likely on the assumption that the reader would be familiar with them. These quotations marked the seasons, both in terms of the Christian celebrations but also in terms of the practices of gift giving and consumption that increasingly became a hallmark of those holidays. Newspapers also commonly reproduced texts in their entirety, publishing not just news but literature, texts, advice, stories, recipes, and other information literature. The poem by Rosetti and the Gospel accounts of Jesus’ birth were thus linked not just by their subject matter, but by the ability to be reproduced as interesting texts by which a newspaper could appeal to its readers. 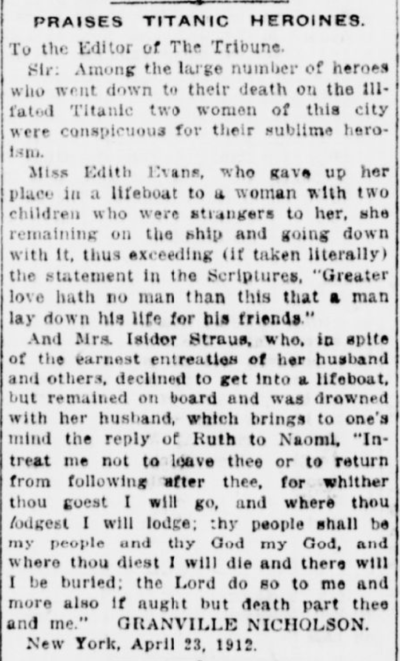 After the sinking of the RMS Titanic on April 15, 1912, two New York women were lauded in the newspaper after they declined seats on a lifeboat. Mrs. Edith Evans gave up her seat for a stranger with two children, while Mrs. Isidor Straus remained behind to drown with her husband. The author felt their actions exemplified John 15:13, that “Greater love hath no man than this that a man lay down his life for his friends,” and deserved public acknowledgement.